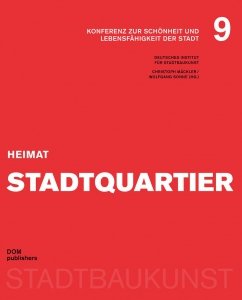 With housing being scarce in large built-up areas, everyone is talking about urban districts that they can call home. That presents a great challenge for new urban housing projects in Germany because the designs for those mixed-use city districts have to be attractive, socially acceptable and functional all at the same time. Now is the time for city districts we can call home! How do we achieve a successful differentiation between public and private spaces in an urban setting? Which types of housing can help to create a functional mix and social diversity? How can we develop urban squares and streets that are full of character? How can communities and developers create such an urban district? Taking these questions as a starting point, the interdisciplinary discussions at the 9th conference on the beauty and viability of towns and cities explored ways of implementing the ideas developed at the recent Düsseldorf conferences by taking specific places as examples. Those taking part included representatives from housing associations and housebuilding firms, public bodies (from politics, municipalities and planning authorities) and other experts (scientists, architects, urban planners). Examples from Bochum, Dortmund, Frankfurt am Main, Freiburg im Breisgau, Cologne, Paderborn and Regensburg were presented during the event.